This month has been quite an exciting month for all of us here at the clinic because we have grown not only in number, but as individuals as well. While we say “hello” to all the new staff, we can’t help but also look back at the people who will also be bidding us their farewells, people who have been an integral part in bringing Glory Reborn closer to its vision. Although we will be missing them, we can only let them go with happy hearts knowing that wherever the Lord takes them, they will continue to shine and be the extension of the Lord’s hands and feet.

One of the staff who will be leaving us is Carolyn. Some of you already have seen many photos of her since she has been with us for over 6 years. She first came into the clinic when she was only 18 years old, fresh out of college. Although back then she saw herself as young and immature, it was evident that she already had the passion to learn and compassion for the poor. No matter how hectic the day was, no matter how many patients she had to take care of, you would not hear a single complaint from her – that’s Carolyn. At times, when other staff would have the privilege to take care of her patients, they would request to be prayed for after because that’s how Carolyn did things. Even without anyone watching, she did more than what was needed of her duties. 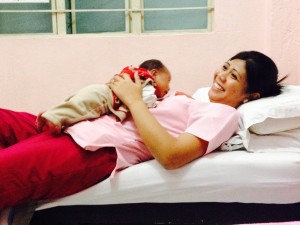 Glory Reborn is a place where the primary people being ministered to are the staff, because how can they minister to the patients if they themselves are running on empty, right? The staff are encouraged to be better people, to be non judging and to always polish the dullest sides. Carolyn has perfected that craft and has now realized that Glory Reborn has equipped her with what she needs in order to pursue God’s other plans for her life.