The air was filled with excitement and disco -Christmas music as a long line of women stood in the humid heat waiting for a free ice cream cone. My eyes, watching the line, wondered onto the pregnant women lined up waiting. It seems that over the years of working with pregnant tummies, my eyes automatically can search a crowd and tell you how many women are pregnant. Today there are four pregnant women in line but my eyes focus on one especially. Her tummy is bigger than the others, maybe she is due any day I thought to myself. Her XL tee shirt was tattered around the neck, partially because she was chewing on it in line and the once white shirt is now closer to grey-brown. I can barely see the edge of her shorts under the large shirt and her skinny legs are covered with mosquito bites and a suspicious rash. But what really caught my eye was the expression on her face. I saw her teeth, black from cavities with many teeth missing altogether. I guessed she was younger than I imagined, maybe 24 or 25; I would later find out that she was only 20. Her eyes were full of tears that were running down her sunken cheeks slowly. Why was she crying? She continued to wait in the line for the coveted ice cream with about a hundred other women/girls all giggling and smiling as they held a Christmas gift in one hand and anticipated holding a mango ice cream cone in the other. Yet her face said she was a million miles away in another world of thought that was so contrary to the joy that was around her.

After she received her ice cream cone, I approached her and introduced myself. She told me her name, Rachel (names have been changed). I told her I was a midwife and she said she knew; some of the other girls in line had delivered babies at our clinic. I asked her how her baby was and the tears began to stream more quickly now. My heart sunk briefly preparing myself for what I thought she would say: the baby had died in her womb, a situation all too common for this community. I was nearly prepared when she said between tears that her baby had been in her womb for 10 months and that the local doctor had told her not to come back for check ups because she was a month overdue. I smiled with relief, thinking to myself, whew! This I can handle. I was relieved to hear that her baby was still kicking well inside her tummy and continued to ask more questions. I told her not to worry that as long as her baby was moving inside she probably had a simple case of mathematical error since her first baby had been born only 11 months earlier. I put my hand on her tummy and confirmed that the baby was moving vigorously. Since I failed to bring my B/P cuff to this Christmas party I did what vitals I could and gave her my vitamins. I told her to come to the clinic the next morning and I would check the baby by ultrasound. Her eyes lit up and the tears ceased and she looked at me in the eyes for the first time as she continued to chew on the neck of her tee shirt. A glimpse of hope then made the rest of the now melted ice cream cone more enjoyable for Rachel. It was a successful party in the red light district and as sunset began everyone cleared out for work. Later that night, when I was holding and playing with babies that were born in the clinic I realized that this was our third Christmas celebration with these precious girls and how wonderfully privileged we are to be able to interact in a community that needs the message of Hope that Christmas brings.

The next day Rachel came to the clinic. Everything looked good on her ultrasound. She was expected to have a baby girl any day now.Â Our social worked then accompanied her to the laboratory where we prayed she would not come back HIV positive. All was negative and aside from the rash, which we would start treatment for, everything looked good for Rachel and baby. Two days later Rachel came back for her prenatal check up. â€œHave you been taking your medicine for the rashes?â€ the nurse asked her. â€œOnce on the first day then none today.â€ Rachel replied. A quick glimpse into Rachelâ€™s chart showed that she had only been educated until the third grade and then had to start working in the dump site until she was able to work in the red light area.Â Since she was illiterate she probably did not understand the medicine instructions. The nurse called me in for help. It would cost too much for Rachel to come for her medicines three times a day so we had to get creative. We tried drawing pictures of breakfast time, lunchtime and dinner time and explained to take the medicines with her meals. We were unsuccessful because Rachel didnâ€™t have enough food to eat three meals a day. She would drink milk in the morning and not eat again until the evenings after someone came back from the dumpsite with food or a neighbor shared. Since she was pregnant she was not allowed to work in the red light area, money was clearly tight. Ok new ideaâ€¦change the dosage of the medicine to be given only twice a day. This seemed to get us a little further in our explanation but I wasnâ€™t convinced she understood. She seemed to have a glazed–over look, which I attributed to drug use noticing the track marks up and down her arms. We fed Rachel lunch and then the idea cameâ€¦ baby clothes. We have plenty of those! We let Rachel choose a baby hat, a baby outfit, and a blanket for her growing baby. We explained that when you get dressed in the morning, just like you would dress the baby, you take your medicine and when you go to sleep, with a blanket, you take your medicine. The light went on and we had success! All this just to get her to take her medicine how was she going to care for a newborn? Who was caring for her 11 month old now? One topic per visit I decided and Rachel left happily with her new baby things and her medicine. I told her if she brought me the empty packages of the medicines she took over the next two days I would let her choose more baby clothes. 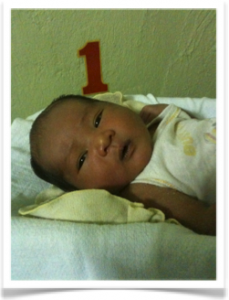 Sure enough two days later Rachel had taken her medicine and brought half of the empty packs wrapped in the baby hat and the other half of the empty packs wrapped in the baby blanket. I was so happy to see the empty packs in baby items and Rachel was so proud of herself too. This is what it is all about I thought to myself and smiled all the way home laughing a little inside at the sight of empty foil medicine packs in a baby hat. As promised Rachel stocked up on her supply of baby items and again got a hot lunch.

Early the next morning Rachel came back in labor. She had a beautiful labor and delivery and despite the baby being 10 months in the womb she was a healthy 6 pounds. She named her baby after the three nurses/midwives that helped her deliver, Grace Maelyn (Grace, Mae and Fralyn are the names of our staff). Since Rachel didnâ€™t finish her medicine for the infection the baby was also be given medication in the clinic for one week. Trying to explain this to Rachel was just as difficult as explaining her medicine schedule except the baby had to get the medicine through an IV! However everyday after bath time in the morning and the evening meal with the staff, Rachel and baby Grace ensured that they took their medicine and except for the lice the clinic staff and myself enjoyed having Rachel at the Glory Reborn Inn. She even enjoyed an extra Holiday Treat during her stay: a pedicure and manicure. Together with the clinic staff, Rachel and baby Grace all welcomed in the New Year with much hope and joy. I am so thankful to our staff and to you for your support that allows us to give such individualized time and care to patients just like Rachel. Where most would have just given up on her and deemed her a lost cause between her work, the drugs and the illiteracy, we have found a beautiful jewel. Through our social work program and in partnership with another local NGO we will continue to help Rachel and baby Grace get back on their feet and hope to get her out of the industry that she works in. We look forward to continuing to serve women like Rachel in 2011,not just in pregnancy but in education and extended care, together with you. Happy New Year from Glory Reborn!